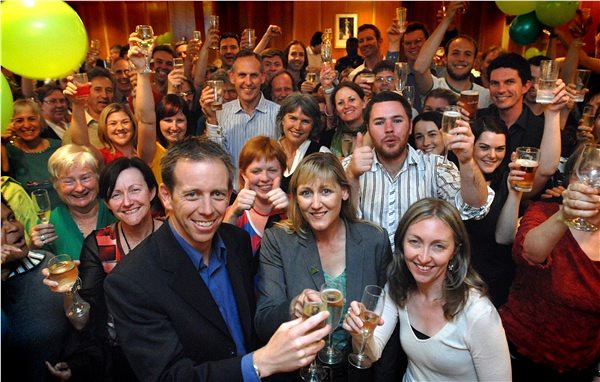 We have seen the terrific result in the ACT where candidates Meredith Hunter, Amanda Bresnan, Caroline le Couter and Shane Rattenbury have been elected to the balance of power and are now in discussions with both the Labor and Liberal parties to see what shape the next Assembly will take and who will be Chief Minister.

"This is a new milestone for the Greens, and underscores the new role of the Greens as Australia's third political force. With both Labor and Liberal captured by vested interests like the coal and logging industries, Australian voters are backing the Greens' long-range vision for social justice, the environment and a new Green economy."

"The ACT Greens in the Assembly will be a really strong team, and I have no doubt that every one of us will continue to provide leadership in our areas of enthusiasm and expertise," said ACT Greens Parliamentary Convenor Meredith Hunter.

"Discussions with the other parties in the Assembly continue today. I expect we will be getting down to tin-tacks on how the new Assembly might work, how best to keep the ACT Government accountable and on making the right policy decisions for the people of Canberra."

"We are making a lot of progress in these cross party discussions, and I believe there will be some real achievements for the ACT even before we get to the first sitting next week."

"Again, I'd like to thank the voters of Canberra for the trust they have shown in us. We look forward to returning that trust through ensuring a progressive, stable and accountable Government that is facing up to the challenges before us," Ms Hunter said.

The Greens are polling 13 per cent nationally, our best result ever, and we have had excellent results in the most recent WA state election, the recent Mayo by-election in SA, in the NT and in NSW local government elections. We have also welcomed Ronan Lee, our first Greens MP in QLD, bringing our total to 25 Greens MPs in Parliaments around Australia and some 100 local councillors.