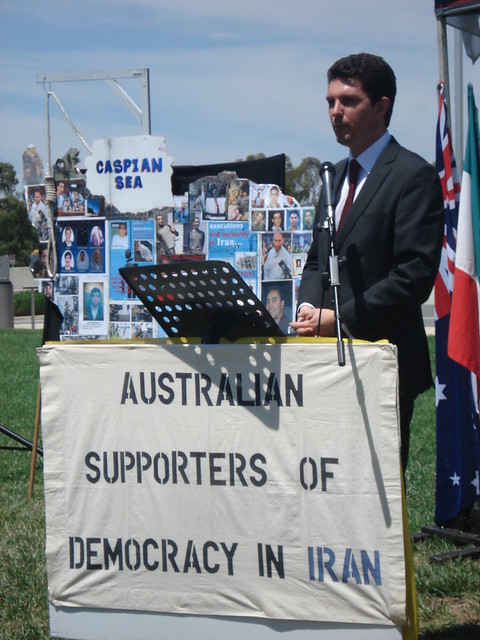 The Australian Greens called for greater support for pro-democracy groups in Iran at a rally outside Parliament House today. The event, organised by ‘Australian Supporters of Democracy in Iran', was held on the eve of the 32nd anniversary of the Iranian Revolution, which paved the way for the Ayatollah's seizure of power.

Australian Greens Senator for Western Australia Scott Ludlam said that Iranians in Iran and around the world are "united by a common dream - that their land will become free".
"The heroic actions of the protestors in 2009 drew international attention to the corrupt manipulation of Iran's elections to suit the needs of the entrenched elite," he said.

Senator Ludlam said that while President Mahmoud Ahmadinejad is a figure of international notoriety, he is only a small part of a much larger problem.

"The real power in Iran lies with a cabal of clerics who can override any decision from the parliament and ban candidates. This is why the system of repression has remained in place through a succession of governments," he said. "The persecution, torture and murder of journalists, activists, dissidents and religious minorities must end now."

"War is not the answer. A different kind of struggle - one against the regime - is needed. The regime must be kept under relentless pressure. Those groups who work towards democracy within Iran must have our support. Those Iranians who flee their country to find safety must be welcomed here," said Senator Ludlam. "The Australian Greens stand unequivocally with the movement for democracy and freedom in Iran."

You can listen to Senator Ludlam's speech here.