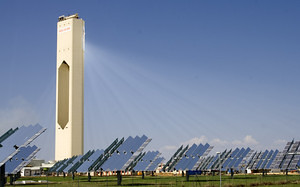 Sunday's announcement of the carbon price package fires the starting gun on the long-overdue clean energy transition.
Western Australia is uniquely placed to benefit from the enormous shift in investment as polluting industries are taxed for the first time and the clean technology sector finally gets the support it deserves.
While all eyes have been on the dollar cost of venting a tonne of C02 into the atmosphere, the Greens have negotiated a broad range of additional measures intended to supercharge the zero emissions economy. The Australian Renewable Energy Agency (ARENA) will be responsible for disbursing more than $3 billion in renewable energy project funding. In addition, a new Clean Energy Finance Corporation will have a $2 billion annual budget funded from carbon tax revenues, a massive injection that is expected to leverage additional billions in private investment.
Unlike the friendless and rejected CPRS model of 2008, this package provides a solid platform on which to develop and accelerate the transition away from polluting fossil fuels. It is a package which plays to Western Australia's strengths: our combination of engineering talent and world-class solar, wind, wave and geothermal resources.
In an important acknowledgement that this initiative will have cost of living impacts, the package introduces tax concessions and compensation for those on low incomes. Treasury estimates the overall cost impacts will be an additional 0.7%, but nonetheless it is important that compensation is well targeted and leaves no-one behind.
Industry compensation too is better targeted in this package than under the defunct CPRS model. Our exporters will, over time, be compensated to the extent of their trade exposure, and some of the most polluting coal plants in the country will be compensated to close, not compensated to stay open - the Tony Abbott model.
The basic principle is to tax polluting industries in order to tilt the economic table in favour of the 21st century clean energy economy. The campaign of deranged hysteria mounted by Tony Abbott and "Lord" Christopher Monckton and funded by some sections of industry is already sounding threadbare and self-interested. It risks evaporating entirely now that the details can be properly analysed.
The timing of the package comes off the back of major advances in renewable energy technology in the last decade. On a recent visit to Kalgoorlie to help launch the ‘Beyond Zero Emissions' proposal for a 100% renewable energy grid, we were hosted by the Goldfields Renewable Energy Lobby to give the Regional Development Commission and the mining sector the first look at how utility-scale baseload solar thermal plants will change the way we power Western Australia while eliminating fuel costs. Solar plants that run around the clock sound unlikely, but they're running now in Spain and North America, and yesterday's announcement opens the door for their construction in our sun-drenched regions. We intend to make sure Western Australia leads the way.
Coupled with local innovations like Carnegie's superb wave energy technology, the ingenious oil mallee plant trialled in Narrogin, and a world-class wind energy resource, it is now possible to plot a renewable energy future for Western Australia. Premier Barnett's gas-heavy ‘Strategic Energy Initiative' will now require a substantial rewrite as we look to a future beyond fossil fuels.
The package addresses the roles land degradation and biodiversity play in climate mitigation, with a massive $1.7 billion investment in landcare to ensure that farmers and Natural Resource Management groups are properly resourced to play a role in stewardship and regional resilience.
In the longer term, this package also sidesteps the bipartisan agreement on a feeble 5% emissions reduction target, with a new Climate Change Authority established to advise the Government on five year carbon budgets needed to reach an 80% emissions reduction objective by 2050. It will set these targets independent of political interference in much the same way as the Reserve Bank sets interest rates, providing advice to Government which in turn establish permit allocations once the system transitions to emissions trading post-2015.
This is a good example of what can be done with minority government, where all parties are forced to sit down and negotiate if they want an outcome. The package isn't perfect by any means, but in a meaningful way it represents the first turning of the ship. This is the first real step along the path to a renewable Australia, nearly 20 years after we signed a global agreement to take up the challenge of climate change. At long last, this great work has begun.
Full details of the package here - http://greensmps.org.au/